The Costa Rican Amphibian Research Center (C.R.A.R.C.) is a truly unique small family project, one that is dedicated to conducting novel biological research and in situ conservation, while at the same time offering a chance for visitors to observe and learn about some of the amazing natural history of the central Caribbean foothills of Costa Rica.

THE FIRST OF ITS KIND IN COSTA RICA

The C.R.A.R.C. was established by Brian Kubicki in 2002, to fulfill the need of a project specifically focused on conducting biological research on amphibians throughout Costa Rica, and at the same time actively working on designing and putting into practice pioneering methods of in situ conservation in one of the most biologically diverse regions on the planet, that of the lower and mid-elevation slopes of the central Caribbean zone of Costa Rica. The central Caribbean slopes of Costa Rica are home to one of the richest amphibian species assemblages on the planet, yet so much remains to be explored and studied. Our goal is to continue working on filling in the existing gaps in the knowledge of the Costa Rican amphibians. 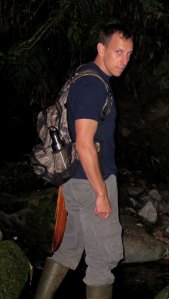 Brian Kubicki and his wife Aura Reyes constitute the Costa Rican Amphibian Research Center. Brian has been living in Costa Rica on a permanent basis since June of 1998, during which time he has invested thousands of hours to intense fieldwork throughout the republic.  Since his arrival in Costa Rica the principal emphasis of his research has been focused on obtaining a better understanding of the alpha-level taxonomy (species-level taxonomy), biogeography, and natural history of Costa Rican amphibians. Although Brian’s work deals with all amphibians species native to Costa Rica, he has a special interest and focus on glass frogs, poison frogs, tree frogs, New World direct-developing frogs, and salamanders.  His research has resulted in numerous important and novel discoveries, including the rediscovery of several species of amphibians that had not been seen in decades. Brian has also authored or coauthored various scientific and popular publications, including the description of six amphibian species that were new to science and two books (Leaf Frog of Costa Rica and Glass Frogs of Costa Rica) published by the Costa Rican National Institute of Biodiversity (INBio).

Our efforts are made possible thanks to the funds that are generated by our visitors and private donations. Please consider helping support our efforts by coming to visit us on your next trip to Costa Rica or by making a donation.